On April 21, I received a rare bird alert email from eBird, stating a Yellow-headed Blackbird was reported at the corner of Lakeshore Drive and Calabogie Road in Laird and that Pectoral Sandpipers were reported in the flooded fields of Lake George Road.  Both of these reports were submitted by John Brett, someone who must not be from the area, but he submitted a photo of the Yellow-headed Blackbird, so I knew it had to be true.  Off I went to try to find these birds!

I went to Lake George Road first.  Barry Lyons was also there, looking for the Pectoral Sandpipers as well.  We could not find them.  Barry was unaware of the Yellow-headed Blackbird, so we decided to head over there together.  I was leading the way in my car and Barry was following behind me.  As I approached the reported location, I could see tons of blackbirds feeding on the ground in someone's yard.  As I got right up beside all the birds, it was impossible to miss the one with the yellow head.  Lifer!  Just as Barry pulled up and I opened my car door, they spooked and took off.  Luckily, they all landed in the nearby trees.  It didn't take us long to relocate the Yellow-headed Blackbird so that Barry could check it off on his Algoma District list as he had seen them out west before.

Unfortunately, I wasn't able to get any great shots of it, but here they are: 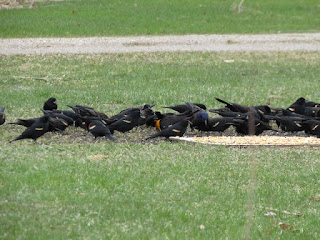 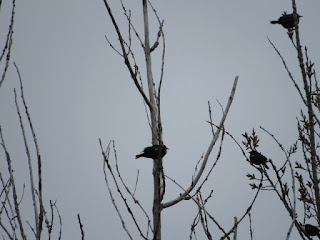 The word quickly spread through eBird and SaultBirds that this bird was here.  Ken McIlwrick managed to get some really good pictures of it, that you can see here.

Luckily, the this flock of blackbirds stuck around for a few days, so most people were able to find it.  I went back three days later, April 24, to attempt to get a better photo, but it stayed up in a tree the whole time. 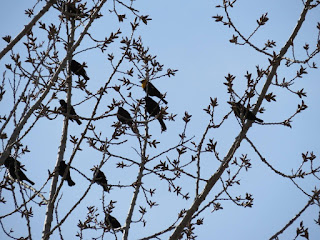 April 24 ended up being the last day that it was reported on eBird.