After returning from leading a guided hike on one of The Kensington Conservancy's properties yesterday, I saw an ONTBIRDS email from David Pryor saying there was a Dickcissel in Algoma.  I was wondering when one was going to show up with the invasion that is happening in Southern Ontario.  Turns out he saw it at the corner of Barber Side Road and Government Road.  I couldn't believe that, as that is literally a 30 second drive from my office in Desbarats.

I hopped in my car and flew up the road.  David heard it about 75m east of the intersection on Government Road.  I rolled down my windows and starting listening.  All of the sudden, I was hearing this loud bird calling, unlike anything I've heard before, so I assumed it was the Dickcissel.  I stopped, whipped out my phone and quickly recorded the song.  I pulled up the Dickcissel song on my Audubon app and turns out that it definitely was the Dickcissel calling.  Lifer!

It was coming from a shrub in the ditch, but I could not see the bird.  I opened my car door, which flushed it out of the shrub.  It landed on a shrub in the middle of the adjacent hay field, so I was able to snap a proof photo: 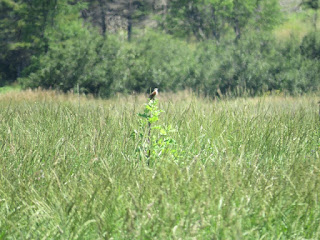 I had to get back to work so I had to leave the cool bird.  I continued to spread to word of this bird.  Ken McIlwrick and Stan Phippen came down to get it after work and Ken got a great photo of it, which can be seen here.

I checked back this morning before work to see if I could find it again, but no luck.  The field was starting to get hayed, so I'm guessing it found somewhere else to go.
Posted by Carter Dorscht at 11:00 AM