A few days ago, I was birding with my friend James when we decided to head down Lake George Road in the Bar River area, which is not too far outside of Sault Ste. Marie.  We stopped for a while and tried to ID a flock of small birds, which ended up being Horned Larks, Lapland Longspurs and Snow Buntings.  It was getting dark, so we decided we had better get going if we were going to cover the whole road.

After driving a couple kilometers, I saw a bird flying over the back of a field.  I assumed it was a Northern Harrier and kept going.  Then there was another bird, but this time it was closer and it quickly became apparent that it was a Short-eared Owl and not a Northern Harrier.  I stopped the car and got out and snapped a few quick pics. 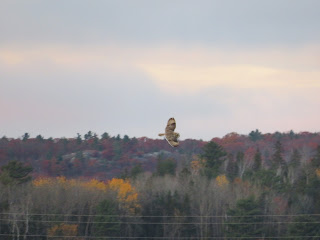 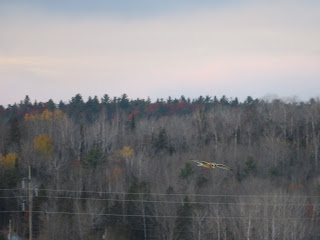 James had stopped to further investigate the first bird and he said it was also a Short-eared Owl.  This was awesome since Short-eared Owl was a lifer for both of us.  We stayed and watched the owls until it got totally dark.  It turned out that there were four of them in total, all hunting over the fields on both sides of the road.  One of them even caught what was probably a vole and landed out of sight to eat it.  I managed a few more proof shots, but the lighting and distance made them very hard to photograph.  CHeck out my eBird report here: http://ebird.org/ebird/view/checklist/S40121362 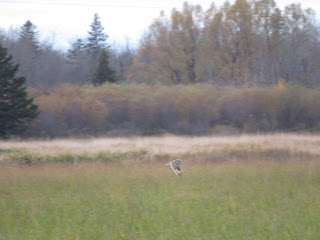 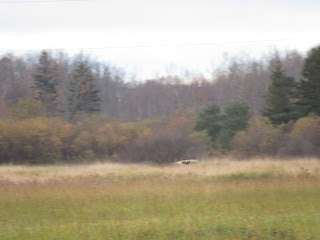 Three of them made a repeat appearance last night, according to an eBird report from another local birder: http://ebird.org/ebird/canada/view/checklist/S40136936
Posted by Carter Dorscht at 10:24 AM