This past week, I attended the Latornell Conservation Symposium in Alliston, Ontario.  Luckily, I got to do some birding on the side.  I flew into Toronto around noon on Monday and had the rest of the day to get up to Alliston, so I took a quick jaunt further south the Colonel Samuel Smith Park in Etobicoke.  While I didn't get any standout species here, I did managed to rack up 31 different ones during my hour and a half there.  It's definitely a cool park and I hope someday to get back there again during a more peak season.

During the course of the two and a half conference, I was able to get 25 species at the Nottawasaga Inn in between sessions, but nothing of note.  After the conference ended, I still have lot's of time before I had to be back in Toronto to catch my flight home, so I headed up the Barrie to try for the Pacific Loon that was still hanging around.

I arrived in Barrie, parked along the waterfront and walked straight to the marina.  It took me less than five minutes of sifting through the Common Loons to find my target. Lifer Pacific Loon! 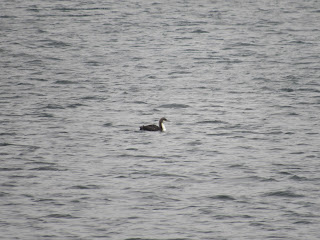 I then walked along the beach to see what else I could find.  I spent some time photographing some Great Black-backed Gulls. 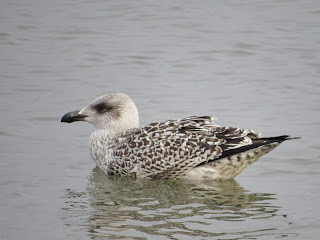 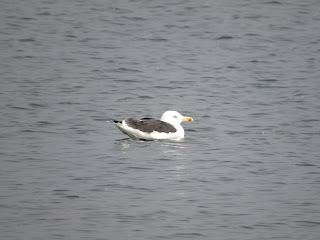 Further along, I walked down a little rocky point and ended up spooking up a Snowy Owl!  It flew across the bay and got harassed by a bunch of gulls, but it successfully landed on the far side of the bay.  I felt bad for spooking it, but I had no idea it was there in the first place! 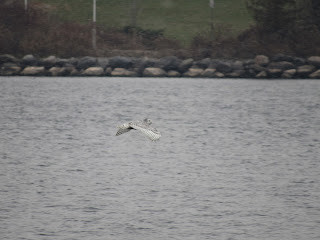 The weather started downing a bit sour, so I got in the car and headed down the 400, onto a plane and got back home.  I'm glad I was able to get one lifer in this visit to Southern Ontario, especially since it wasn't even a birding trip!
Posted by Carter Dorscht at 5:43 PM