Rudyard, Michigan, best known for it's abundance of Snowy Owls during the winter, finally got a Christmas Bird Count.  I had the opportunity to participate in this inaugural and was really excited for it.  I was paired up with Rob Routledge, one of my professors from my time at Sault College, and although the Snowy Owl hotspot wasn't in our assigned area, I was sure we'd still come across some cool birds.

We were supposed to meet at the Rudyard Township building at 7:30am, but Rob and I were half an hour early, so we tried our luck to find some nocturnal Snowy Owl.  We ended up being successful, as the truck lights picked up one sitting on top of a utility pole.  We didn't count it though, because this wasn't in our assigned area and would surely be found again by the area's assigned group.

Once we met all the other groups and determined when we were meeting for lunch, it was starting to get light out, so off we went.  Our day started off with six Wild Turkeys still roosting up in some trees, some American Crows and Common Ravens flying around, a flock of Common Redpolls and a Ruffed Grouse eating buds in a tree.

It wasn't long before we came across our first Snowy Owl of the day.  It was a fair distance back in a field, so I could not get decent photos of it unfortunately.  However, it was not our last one of the day, as we end up with four total and I got photos of the other three.  Not bad considering we didn't have the prime Snowy Owl location. 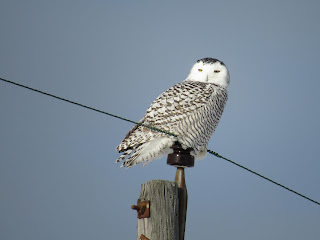 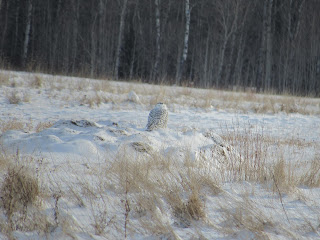 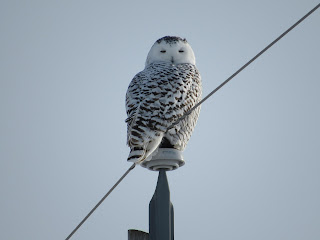 Our highlight of the day was a lingering American Kestrel.  It was hanging out on the top of a tall spruce tree overlooking a farm.  We noted many European Starling and House Sparrows at the farm, so maybe that's what it was feeding on.  It was a fair ways from the road and had it's back to us, but I got the record shot. 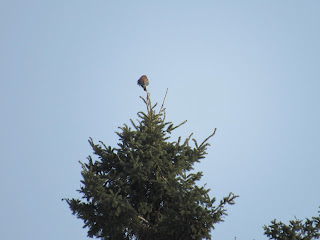 By the time 1:30pm rolled around, which is when we planned to meet everyone in Rudyard for lunch, Rob and I had a total of 20 species, which wasn't too bad, considering this was an inland count with no chance of waterfowl.  Lunch was fantastic and it was great to talk more with some of Northern Michigan's fine birders. 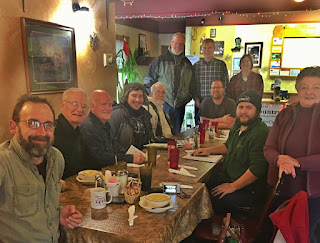 After having lunch, a group of us decided to take a drive up to the Hulbert Bog (which is actually a swamp) to look for Gray Jays.  We ended up finding two of them.  A new species for my Michigan life list! 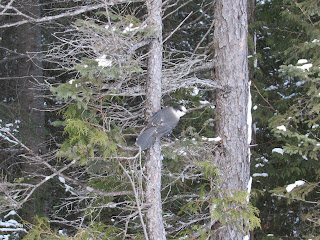 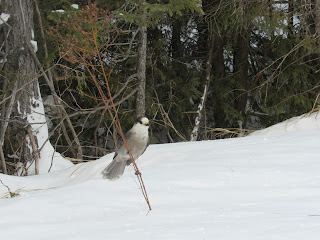 At this point, it was starting to get dark, so we called it a day and headed home.  I got to bed early as I had the Desbarats Christmas Bird Count to run the next day.

As for the total results of the count, click here. 41 species is a really good total for the inaugural count and gives us a number to beat for next year!
Posted by Carter Dorscht at 7:29 AM