Another day, another bird count.  This time it's in Desbarats, Ontario.  This is the count that I created last year as a event for The Kensington Conservancy (TKC), the land trust that I work for.  Last year, in our inaugural count, we had 35 species recorded, so that was our goal to beat.

The day started off great.  I spent the night at my parent's house in Hilton Beach and my dad and I did some owling before the sun came up.  At our second stop, we hit the jackpot.  A Northern Hawk Owl responded with an alarm call to the Barred Owl playback.  This was a new bird for the count, a lifer for both of us, and my dad's 200th species on the year for the Algoma District.  He was worried he was going to get stuck on 199!

We then went our separate ways, as we had different areas to cover.  I met up with my group and the five of us started birding!  As we were driving along Highway 17 to our first destination, we came across a large flock of Snow Buntings.  I estimated about 150 birds and got some photos of a portion of the flock before they flew into the back of the field.  Many American Crows and Common Ravens were coming out of their roosts, so we got good counts of them while we were stopped.

We arrived at the Archibald Homestead, a 169 acre property owned by TKC.  A lone male Pine Grosbeak flew overhead as soon as we got out of the truck, more crows and ravens were counted and we added Black-capped Chickadee and Golden-crowned Kinglet as we snowshoed around the property.

We then headed back into Desbarats to try and find some feeders.  We found two very productive spots, which gave us new species for the day in Dark-eyed Junco, American Tree Sparrow, both nuthatches, Purple Finch, European Starling and Blue Jay.

Our next stop was the Black Hole Preserve, another TKC property.  We only saw three species here, Pine Grosbeak, Black-capped Chickadee and Red-breasted Nuthatch.  However, the wildlife tracks were plentiful.  We saw tracks from Ruffed Grouse, Snowshoe Hare, what was likely a Red Squirrel, Ermine, Northern River Otter, Eastern Coyote, White-tailed Deer and Moose.  We also came across a mysterious spot where a bird landed then took off again.  It was definitely not a typical Ruffed Grouse hole.  There was no scat or anything else down in the hole.  Here are the photos in case anyone knows something that we didn't! 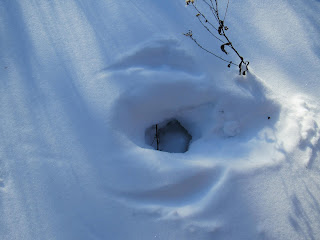 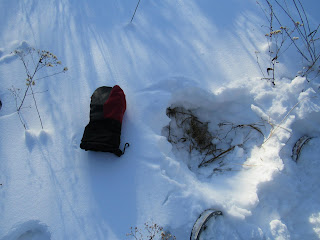 By now, it was lunch time and we headed back to the TKC Conservation Centre.  After warming up and eating, the rest of my group took off for the day.  My dad showed up as well and we decided to do some more driving around.  We were able to add Ruffed Grouse, Rock Pigeon and Pileated Woodpecker for his area and American Goldfinch for mine.  He then went home and I continued driving around.  I was able to add Ruffed Grouse, Common Redpoll and Pileated Woodpecker for my area.  That gave my area a total of 18 species, two more than I had last year in the same area.


It was now time to participate in another Christmas Bird Count!  The Neebish-Dunbar count, which is almost entirely in Michigan, includes a small sliver on the northeast corner of St. Joseph Island.  they were looking for some to cover that section and I said I'd do it, assuming I had time after doing the Desbarats CBC.  I spent about 50 minutes and got Blac-capped Chickadee, Common Raven, American Crow, Hairy Woodpecker, Pileated Woodpecker, Bald Eagle and Ruffed Grouse.  Nothing too exciting, but a few numbers to add to their totals!  The full results can be found here.

Now that the Christmas Bird Count is over for me, it's time to start up that 2018 list once the clock strikes midnight tonight!

Full results for the Desbarats CBC can be found on The Kensington Conservancy's website here.
Posted by Carter Dorscht at 8:03 AM