Saturday was the Sault Ste. Marie Christmas Bird Count.  This year is my first year as one of the co-compilers for the count.  My job is to compile all the data after the count.  It's a big task, with 18 different routes and many feeder watchers, but nothing I couldn't handle.

I was assigned to do the M5 route on the Michigan side of the river.  This route was the most southern section of the circle and probably the best habitat to find Snowy Owls and other raptors.  I went scouting the weekend before, just to get an idea of the area, since I was not familiar with it at all.  We didn't see much of interest, but we didn't bird anywhere near as intensely as we would have if were were actually doing a CBC.  There were five waterfowl species, but we feared the water would freeze up come count day with the cold weather forecast looming.

My birding partner for the day and I arrived at the edge of our route at 7:55am, just as it became light enough to see.  About 10m down the road, I heard the first Black-capped Chickadee call not of the day.  We stopped and stood in this area for a while, which turned out to be productive.  In addition to a few chickadees, two American Goldfinches were heard, a few American Crows flew over and some Wild Turkeys flew out of their roost and into someone's driveway.  We continued down to the end of the road, which was 6km, over the course of the next hour.  We were up to 11 species now.  We got two unexpected, but no unusual Golden-crowned Kinglets, some American Tree Sparrows, a Common Raven, a Hairy Woodpecker, a Downy Woodpecker, a calling White-breasted Nuthatch and some flyover Common Redpolls. 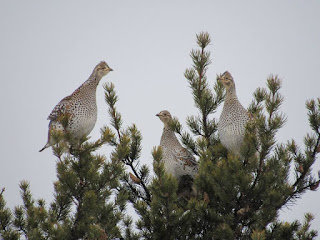 By the time we got over to the river, my fear had come true.  The only open water remaining was right down the middle of the channels.  There was no waterfowl to be found at any of the vantage points during the three times we checked throughout the day.  By the end of the morning, we added Herring Gull, Bald Eagle, Mourning Dove, Red-breasted Nuthatch, Rock Pigeon and Blue Jay to bring us up to 18 species.

The afternoon dragged on and we barely added anything to our list.  A Pileated Woodpecker was the only new species we saw after lunch.  We were at 19 species and desperately looking to add our 20th.  I've never wanted to see a European Starling in our life.

By 4:00pm, we were so tired that we called it quits.  It was a real joy to came back to an hour long wait to get across the International Bridge and back into Canada.  I made it just in time to the results potluck that I was supposed to run!

Most of the results have been submitted at this point.  Some of the highlights include three late staying birds, a Peregine Falcon, a Belted Kingfisher and a Great Blue Heron, plus an always rare for the area Carolina Wren.  Total numbers and species were down, but it was a pretty cold day, which likely explains it.The full results are available below.

I've got two more CBC's to complete this season.  One in Rudyard, Michigan, which is actually an inaugural count, and my very own Desbarats, Ontario count.