This morning, I joined Elliot Nelson to lead a birding tour for the Little Traverse Conservancy in the Eastern Upper Peninsula of Michigan, starting in Pickford.  Due to a few last minute cancellations, only four participants showed up for the tour, but they were eager to see some birds!

To back up though, on my drive down to Pickford, I saw my first Snowy Owl of the day. 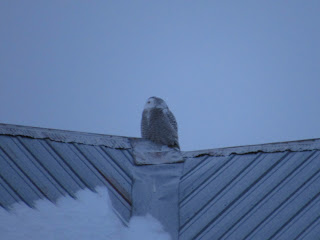 Our first stop of the morning as a group was right in Pickford to see a bunch of Sharp-tailed Grouse.  They were feeding behind a house and could be seen in the nearby trees.  There were a feeder birds buzzing around too, which drew in a Northern Shrike.  It chased and chased some little birds around, but it never seemed to be successful.  It was cool to see it on the hunt though!

After that, it didn't take long to find a Snowy Owl for the group.  While photos were getting taken, Elliot got a text of a picture of a Great Gray Owl from Joseph Hammerle, who was up in the area looking specifically for it.  This owl was seen earlier in the week by a non-birder and many people had been unsuccessful in finding it over the past few days, so it was exciting that it had finally been found again.  The only draw back was that it was a bit of a drive away.  However, the group said they wanted to risk the drive as they had never seen a Great Gray Owl before!  The gentleman who found it said he would wait for us to get there and keep an eye on the owl.  We arrived to bad news.  A Pileated Woodpecker had just chased to owl off into the thick woods.  We stood around for a little while but it never resurfaced, so we hopped back in the cars and drove further down the road.  No very far down the road, there it was!  It was sitting on a snag right on the side of the road.  I got my camera out and snapped two quick and terrible photos before it took off back into the trees. 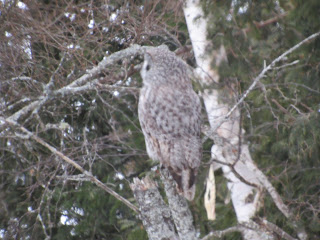 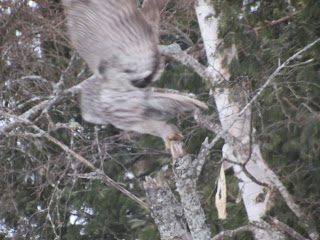 Despite the short showing, everyone in the group got great looks at this magnificent bird.  If I didn't just recently get good photos of the Thessalon, Ontario area Great Gray Owl, then I would've been extremely disappointed that I didn't get better ones of this one.

We headed back north in search of more Snowy Owls in the Pickford and Rudyard areas.  Of course, we found many, but some were outside of photo range. 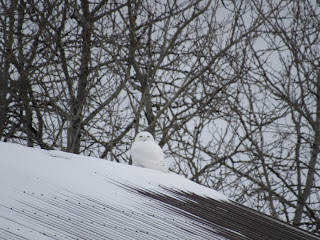 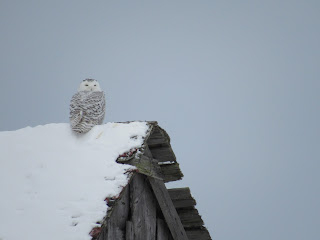 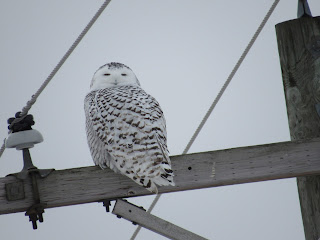 Just south of Rudyard were a few trees full of fruit.  A bunch of Pine Grosbeaks and two Bohemian Waxwings were hanging out there.  No real good photos of them though. 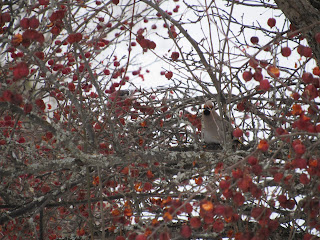 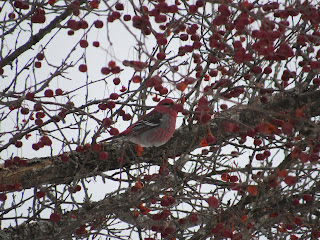 Our last stop of the morning was at some private feeders in Kinross.  A female Evening Grosbeak was the highlight here among the other usual feeder birds.

The tour for the day was over after this.  It was definitely very successful and the participants were extremely happy, especially with the Great Gray Owl.  It turns out that they went back on their own to look for it again, but found a Barred Owl instead.  So it was a three owl day for them!

On my way back north to Sault Ste. Marie, I swung over the to the feeders at the Dunbar Forest.  I got 14 species here, but none of much significance.  A Dark-eyed Junco was the best here!
Posted by Carter Dorscht at 2:11 PM