This morning, I received an email from Andrew Kwon of the Island Clippings, with some photos of a small little owl that was sitting on a shovel outside his window. He wanted to confirm his ID of Northern Saw-whet Owl and sure enough, that’s exactly what it was. I assumed that the bird was long gone, but it turned out that it was still sitting there when Andrew replied to my email, so I hopped in my car, left work in Desbarats, and drove over to Andrew’s house on St. Joseph Island.

It was still there when I arrived, although it had moved from the shovel to the wheelbarrow. 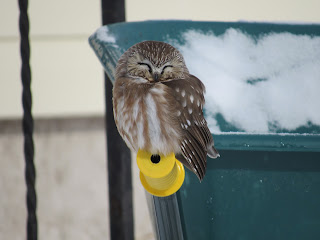 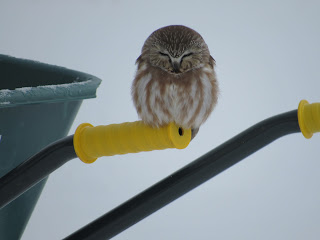 I've heard these little owls before, but this is my first time ever actually seeing one.

This is the second owl Andrew has seen from the comfort of his own house.  Last winter, he had a Snowy Owl perch on the hydro pole that directly in front of the house!

I got a Snowy Owl in Sault Ste. Marie last week, so now I'm up to three owl species in the Algoma District this year.
Posted by Carter Dorscht at 12:19 PM