After many local birders discussed the bird, it was determined that it was a Common Goldeneye x Hooded Merganser hybrid.  This bird was not seen again.

That is, until recently.  Ken McIlwrick photographed a Common Goldeneye x Hooded Merganser hybrid in the river on January 31.  It was thought at the time that this was likely the same bird that Barry photographed last winter.

When the Barrow's Goldeneye was discovered on Feb 8, birders flocked to the river.  A couple photos were taken of the Common Goldeneye x Hooded Merganser hybrid at this time as well.


During my hunt for the Barrow's Goldeneye on February 9, I was able to get a crappy photo of the hybrid. 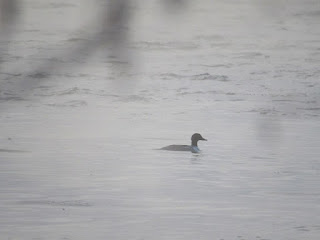 Yesterday evening, February 10, I was down at the river to try and relocated the Barrow's Goldeneye to attempt to get a better photo of it.  I ran into Bob Knudsen here, who pointed out there were two Common Goldeneye x Hooded Merganser hybrids in the raft of goldeneyes and mergansers that had started to form.  I snapped some photos. 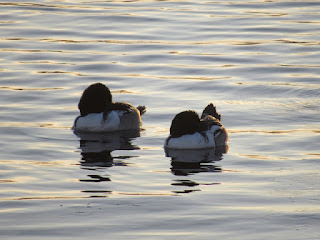 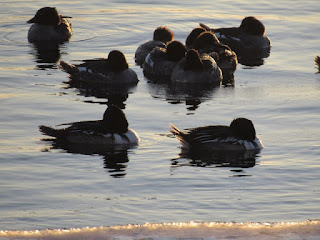 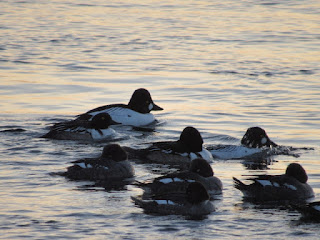 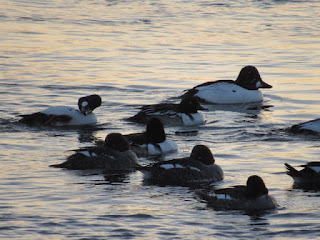 As you'll see, I was unable to photograph one of the hybrids with it's head up.  However, from these photos, it certainly looks like it has a much rounder head that the hybrid that does have it's head up in a couple of my photos.

Now, after looking back at Ken's photo from January 31, I think that this round head bird is the bird he saw, while all the other photos have been of of the flatter head hybrid.

Neat birds and really cool to have two of them present at once!
Posted by Carter Dorscht at 6:02 PM