On Sunday, I was up before 4:00am to get ready for a day trip up to Wawa in search of boreal birds.  I picked up a friend and we were on our way.  My main targets for this trip were Black-backed Woodpecker and Boreal Chickadee, as they were two species I still did not have for my Algoma District list.  Any other boreal species would be nice for my year list too, as well as the Eurasian Tree Sparrow that's been in Wawa since October.

Our first stop was downtown Wawa to see if the Eurasian Tree Sparrow was still around.  We decided to make this quick though.  The annual ice fishing derby was taking place in Wawa over the weekend and snowmachines were flying around in every direction.  It didn't help that the house hosting the rarity is right on the edge of Wawa Lake, where all the ice fishing action was happening.  We pulled up and hopped out of the car.  It didn't take long for me to find the sparrow and snap a distant few photos.  I also caught a quick glimpse of the Song Sparrow that decided to hang around here this winter too, but I didn't get photo of it. 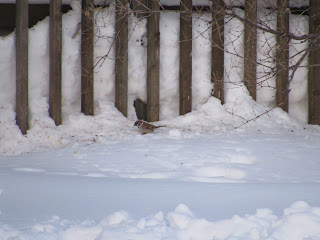 With our first target quickly acquired, we were on the move again.  We drove just back down the highway to Michipicoten.  We walked all around the little town and saw a ton of common feeder birds, such as American Goldfinches, Common Redpolls, Pine Siskins and Pine Grosbeaks.  We had hoped to find a Boreal Chickadee among the Black-capped Chickadees, but no luck here.  There was a Common Grackle though, which must have been the same one seen here last week by a couple other birders.  I'm guessing it stuck around all winter rather than it being a very early migrant. 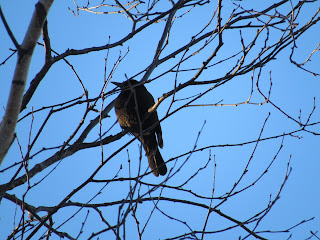 Our next stop was the road on the way to the landfill.  Here we struck gold.  Soon after we got out of the car and started walking, four Red Crossbills went flying over.  I wish they had landed, as I've still yet to photograph this species.  It didn't take long until I heard a woodpecker banging away on a tree.  We stopped and listened and it finally made a call.  Black-backed Woodpecker!  It seemed like it was slowly coming closer, so we waited.  Sure enough, it flew out of the trees, crossed over the road, and landed.  I managed only one photo before it took off again, but it was enough to tell what it was! 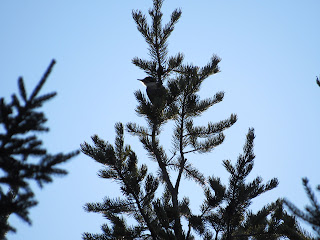 We continued walking down the road.  Blue Jays, Common Ravens and American Crows were zooming all over the place while being very vocal.  We soon came across some trees with some very active chickadees fluttering about.  After a few seconds of checking them out, I found one that was indeed a Boreal Chickadee!  I took a lot of crappy photos before I finally got one that wasn't nearly as bad as the rest. 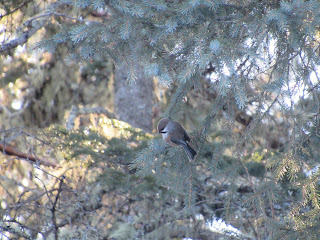 There ended up being at least three Boreal Chickadees here.  I also heard another Black-backed Woodpecker just a little further down the road.  We got to the gate at the landfill, which was closed, so this was the end of the line for us.  On our walk back to the car, we stopped because we heard some howling.  A pack of wolves were nearby!  It was so cool to hear them.  After an early lunch at Tim Horton's in Wawa, we stopped at a few more places and walked around.  We saw lots of birds, but not really anything else of note.  So we got back on the highway and started our journey home, with plans to make some stops on the way home.

Our first stop was at Old Woman Bay in Lake Superior Provincial Park.  Bird wise, not much going on here, but just as we were leaving, I saw a Gray Jay flying through the trees.  Our next stop was to check out the feeders at the park office.  There were lots of Pine Grosbeaks, as well as some Black-capped Chickadees, Common Redpolls and Red-breasted Nuthatches.  I got some decent Pine Grosbeak photos here. 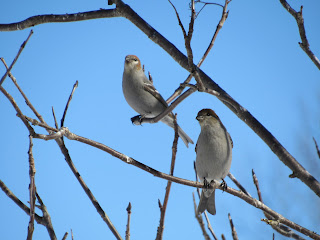 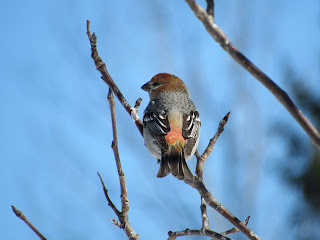 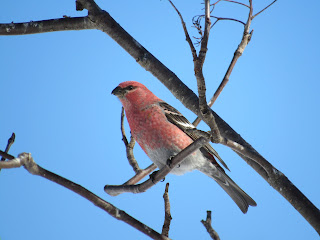 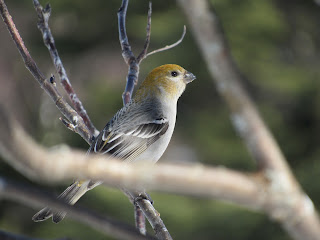 Our last stop of the day was at Katherine's Cove, still within the park.  This was definitely the most eventful spot, but not for a good reason! After checking out the view of frozen Lake Superior and seeing some Black-capped Chickadees, Red-breasted Nuthatches and Downy Woodpeckers, we got back in the car.  However, the car didn't want to go.  My front left tire was parked on a patch of ice and was just spinning.  It didn't help that I couldn't move any further ahead.  My only option was to reserve up a small incline.  After 45 minutes or so, we finally got a tree branch under the tire enough for the tire to catch and I got out of there.  The one positive of this scenario was that a small flock of White-winged Crossbills flew by at some point.  We were back on the road, and despite some extreme frustration on my end, no damage was done and we enjoyed the rest of the drive home on what was a beautiful, sunny day!
Posted by Carter Dorscht at 10:11 AM