On Sunday, my friend and coworker Nathan and I traveled up to the Whitefish Point Bird Observatory near Paradise, Michigan in search of late migrating birds.

We arrived on location just after 6:00am to a very heavy fog cover.  Obviously, this wasn't ideal for finding birds, but nothing we could do about that!  It became quickly apparent that the most frequent bird we were going to see that day was Blue Jays.  Hundreds were flying around overhead and among the trees.

We went straight to the beach in search of any shorebirds we could find among the fog.  Since the Piping Plovers were back, most of the beach was blocked off, but they left a small strip right along the shoreline to walk along.  Before we found the shorebirds, six White-winged Scoters came flying out of the fog, practically right into our faces, then turned right back into the fog.  It was pretty cool to see them so up close, even if it was very brief. 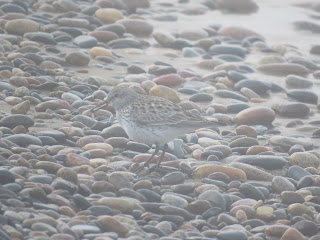 We were hoping to catch up with the Piping Plovers, but no luck this go around.  We headed back to the feeder behind the gift shop.  No much was going on there (other than a ton of Blue Jays), but this Philadelphia Vireo was cool to see. 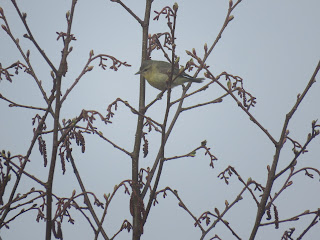 There was also a Snowshoe Hare visiting the feeder area. 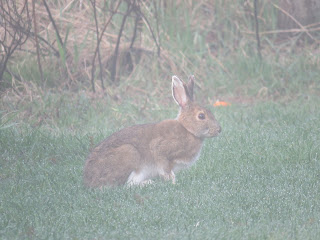 We explored around some of the other areas of the point, but didn't see much of note, so we headed back down to the beach.  This time, we came across a flock of shorebirds almost right away.  It was a group of basically the same species we saw early, but this time, there were three Ruddy Turnstones in with them!  Unfortunately, the fog cover was so thick that my photos of them are very terrible.

Further down the beach, we finally came across the Piping Plovers, another lifer for me.   The male was actively searching for food while the female just sat and watched. 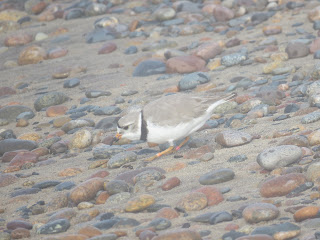 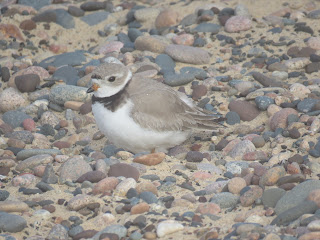 We headed back up to the parking lot, where we quickly learned that a Connecticut Warbler was just seen.  In about five minutes, we found it again and I managed an okay shot of it. 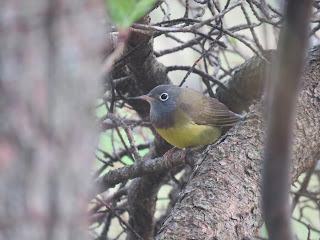 Most of the fog had cleared by now, so we headed up with the hawk watch platform.  A decent number of Turkey Vultures, Bald Eagles, Broad-winged Hawks and Red-tailed Hawks were moving past, so we sat and viewed them for a while.

Before we left, we made one more pass at the beach, in case we could find one or two more shorebird species.  Sadly, we did not, but with most of the fog gone, the photo opportunities were better.


Here is just a small fraction of the the Blue Jays scene looked like throughout the morning. 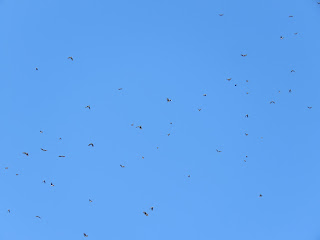 Our full checklist of species from the morning can be found here on eBird: https://ebird.org/view/checklist/S46071877.
Posted by Carter Dorscht at 10:33 AM