Wow, the wetland in Echo Bay sure does have some good birds in it right now.

On Saturday morning, two other local birders had Yellow Rail and Least Bittern calling from the Echo Bay viewing platform. I was busy all day Saturday doing some private guiding, so I wasn't able to get there until yesterday morning.

I arrived at the platform at 5:45am, over an hour later than I wanted to get there, but I was up past 2:00am so I slept right through that 4:00am alarm. Luckily, I still arrived in time to hear the Yellow Rail call once, only about six minutes after I arrived.  Soon afterwards, I heard the Last Bittern call and then I saw it fly. Then I saw it emerge from the reeds and I was able to get some decent photos of it. 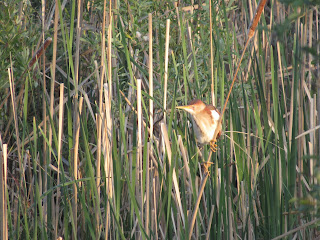 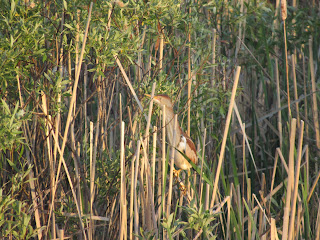 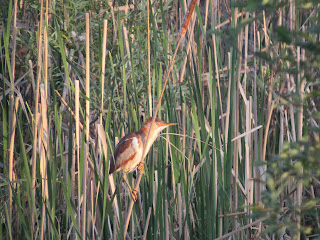 The Yellow Rail was a lifer for me and it was my first record of a Least Bittern in the Algoma District.  There was also an abundance of American Bittern, Sora, Virginia Rail, American Coot and Pied-billed Grebe calling from within the wetland.

From there, I went over to the loonie boardwalk to conduct my MMP survey for that route.  I got Sora and Virginia Rail, but it was nothing compared to the viewing platform.  I then went on a canoe adventure in the Hay Marsh on St. Joseph Island in search of Sedge Wrens, which were successful in finding.

While I was out there, I got an eBird alert of a Common Gallinule from the Echo Bay viewing platform.  Common Gallinules are very rare up here, with only two previous records of one in the Algoma District.  On my way home, just after 7:00pm, I stopped back in at the platform, hoping to hear the gallinule.  It didn't take long before I was successful!  It was actually really close to the platform, but I never got a visual. I did manage a few recording of it calling though.

Yellow Rail, Least Bittern and Common Gallinule. Not a bad day!
Posted by Carter Dorscht at 10:13 AM