On July 26, 2019, I received a message from a local photographer. Her husband saw a different looking goose while kayaking on the St. Marys River in downtown Sault Ste. Marie. After reading her description, my first response was Greater White-fronted Goose, but I was thinking it was going to end up being a domestic Greylag Goose or something like that. She went off to take photos herself, and sure enough, it was a Greater White-fronted Goose.

Within Ontario, there was a grand total of zero previous records of Greater White-fronted Goose on eBird during the month of July, so this was a significant find, on top of the fact it's a rare bird for here to begin with. There are usually a few sightings of this species during spring migration in the Algoma District, usually requiring a scope to scan fields full of geese in agricultural fields. This bird was much easier to find, as all you had to do was drive up to the Civic Centre and you'd likely see it on the lawn or in the water at the adjacent marina.

Since I already had this species for the year, I wasn't going to rush into town just to see it. However, a few days later on the 29th, I had to go into town, so after running my errands, I swung by to see it. I couldn't believe how tame it was, it acted just like the usual city-living Canada Geese that have no issues with people being up close and personal. I was definitely able to get my best photos of this species to date! This was the 198th species I've seen within the city limits of Sault Ste. Marie. 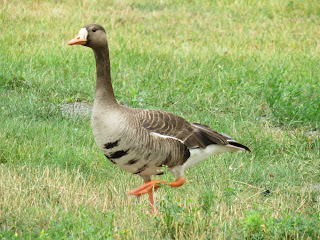 The goose hung around the Civic Centre for a while. Multiple birders and photographers got to go see it and it was a lifer for many of them. A few people even saw it narrowly miss death as it attempted to cross the busy road.

On August 1st, the bird was seen making it's way east down the river towards Bellevue Park. Two days later, it was actually recorded within the park, making it the 209th species recorded there! I was in town again the day following this, so I made a quick stop, just to see it again. 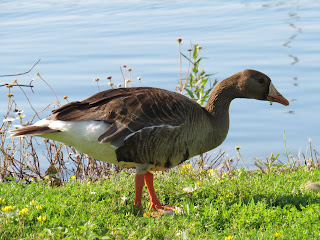 As of today, August 6th, the goose continues at Bellevue Park. It would be interesting to know this bird's story. Did it leave the arctic breeding grounds early or did it never make it there? How long will it stick around for? Who knows, but I'm sure many will continue to enjoy its presence while it lasts.
Posted by Carter Dorscht at 5:07 PM