Today I lead my first field trip for the Ontario Field Ornithologists!

We started the morning off by traveling down to the St. Joseph Island Migratory Bird Sanctuary, the best birding location of St. Joseph Island. However, this morning was not our morning. Heavy fog covered the entire area, making it impossible to see anything out over the water. Inland, there were a few birds here and there, but not as many as I expected to be there. While we waited out the fog, we saw some Northern Flickers, Black-capped Chickadees White-throated Sparrow, and Sharp-shinned Hawks. When the fog finally lifted, at first all that was out on the water were a few Double-crested Cormorants, but after scanning and scanning, we found two Ring-billed Gulls. After a few minutes though, we realized there a smaller gull with them, a Bonaparte's Gull! This is a nice bird to see around here.

Our next stop was the Mountainview Centennial Grounds. Bird actively was actually pretty good here, although only for a few species. There were at least 16 Eastern Bluebirds here, many of them posing well for photos. Northern Flickers, Eastern Phoebes, and Chipping Sparrows were all over too.

We ended the day with visits to the Huron Line Fields and Maguire Drive Boat Launch. By now, it had warmed right up and raptors were on the move. Most were Turkey Vultures, but there were also Bald Eagles, Sharp-shinned Hawks, Broad-winged Hawks, American Kestrels, and a Merlin.

In total, 40 species were recorded during the field trip.

Thanks to everyone who participated! Hopefully there will a future Ontario Field Ornithologist field trips in the area again soon! 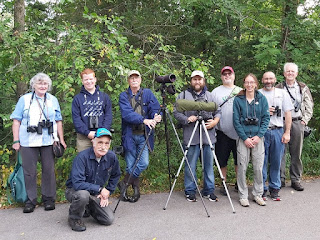 Posted by Carter Dorscht at 5:42 PM