I woke up early yesterday morning and took my dogs to the St. Joseph Island Migratory Bird Sanctuary. We saw a moose, had over a hundred Pine Grosbeaks migrating overhead, and recorded the first Bohemian Waxwing for the sanctuary's all-time species list. I got home and had a good early afternoon nap. So it was a very successful day, but it was about to get much better.

Minutes after waking up, my friend Tony posted photos on Facebook of a Tropical Kingbird that he had taken just over an hour beforehand just up highway 129 north of Thessalon. I quickly fired off some texts and got ready to go myself. I was out of town when the Vermilion Flycatcher showed up this spring, so I really did not want to miss this vagrant southern flycatcher.

About 50 minutes after Tony first posted the photo, I arrived on scene, and luckily, there was the bird, sitting nicely right on the powerline, right where Tony said he saw it. One of the easiest birds I've chased! 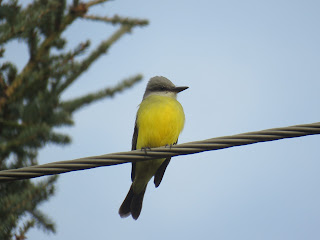 I stayed with it for about an hour and a half and it was very cooperative the whole time. It ended up staying around until dark, but there were no signs of it this morning when many birders went out looking for it.

I am no expert at yellow-bellied Tyrannus flycatcher ID, but those with experience are saying that the deeply notched tail, short primary projection, and long, thin bill all point towards Tropical Kingbird over the very similar looking Couch's Kingbird, and after doing lots of research online myself, I'd have to agree with that. Vocalizations are very useful to differentiate the two, and while I failed to get a recording of it, I did hear it call once, sealing the ID.

My understanding is that prior to 2020, there have only two accepted records of Tropical Kingbird in Ontario. There have been a handful of other probable records, but those have been left officially recorded as Tropical/Couch's Kingbird due to the difficulty differentiating the two species. This is of course a first ever record for the Algoma District and a lifer for me! 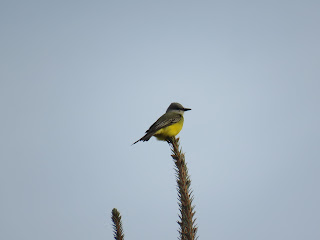 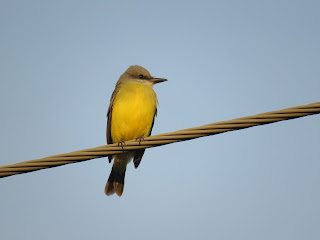 Posted by Carter Dorscht at 1:37 PM