On Thursday, I received an email late in the afternoon that a Summer Tanager was visiting a backyard in Sault Ste. Marie. Unfortunately, I had gone to my parents' house after work and there was no way I would make it there in time before it got dark. Then next day, I headed there straight after work, but the bird didn't show. A few other birders had tried for it during the day, but none of them had any luck either. Only the homeowners saw it on Friday.

The next morning, I headed back once again before my Sault Naturalists bird walk I was leading. Two fellow birders were already there, but had not seen it yet. To my luck though, it flew in probably only a minute after arrived! This was my 254th species within the Algoma District. 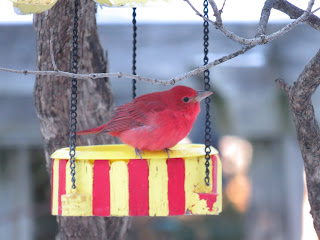 This bird is the second ever record of one within the Algoma District on eBird, but I know of at least one not on eBird.

The homeowners are welcoming to birders if anyone wants to go see it. It's being seen at 24 Ford Street. If they're home, feel free to knock and introduce yourself. They will then likely allow you access their backyard, but I feel as though it's best to just stand at the white fence and watch the backyard from the driveway so that you don't accidentally spook the bird and ruin it for someone else. It's also a good idea to park safely on the street and approach the house on foot, especially if they aren't home at the time so that you're not blocking their way in if they return. The bird isn't always present so some patience will likely be required.

Good luck to anyone who goes for it! Make sure to be respectful so that us birders can continue to visit rare birds in people's backyards!
Posted by Carter Dorscht at 10:03 AM