Yesterday morning, I was joined by three other Ontario Field Ornithologists members at the St. Joseph Island Migratory Bird Sanctuary, where we took in some migration action. It was fairly windy, but the sun was shining and it was relatively warm, making for a fantastic fall day to be outside.

I hoped that we would be able to witness a solid waterbird movement, however, that was not the case. We recorded only seven duck species with very low numbers. A few Common Loons and Double-crested Cormorants were on the move south too. The highlight waterbird were four swans, which were likely Tundra Swans, but they were ~5km away flying over Michigan on the other side of the river, so no chance to officially rule out other swan species.

Raptor migration made up for the lack of waterbirds. We recorded nine species of raptors, some of which in decent numbers: Turkey Vulture, Osprey, Northern Harrier, Sharp-shinned Hawk, Bald Eagle, Red-shouldered Hawk, Red-tailed Hawk, American Kestrel, and Merlin.
There was also a good flight of passerines. Flocks of mixed blackbirds, American Crows, and Blue Jays were constantly going overhead. We also had 40+ Eastern Bluebirds, a ton of Pine Siskins, some Purple Finches, and a solo Horned Lark. In the forested areas, both kinglet species were abundant, but it was generally quiet bird-wise, save for the odd woodpecker or sparrow. A Ring-necked Snake was definitely the highlight on the walk back out to our vehicles.
In total, 48 species of birds were recorded within the sanctuary over the course of the field trip. 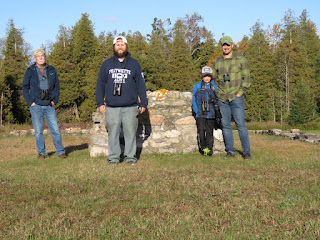 Posted by Carter Dorscht at 8:02 AM