I was lucky enough to be in Southern Ontario last week and close enough to Schomberg that I was able to make a stop to see the rare Barnacle Goose that was hanging around. 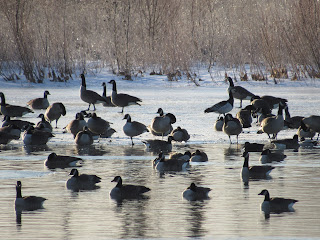 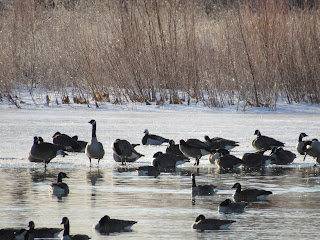 In the first photo, the Barnacle Goose is standing up on the ice, near the top right corner, facing right. In the second photo, it's laying down on the ice, back centre.

This very well could be a species I'll never seen again in the wild in Ontario.  This bird likely came from the eastern seaboard, where some rare European goose species have been known to winter.  On it's journey back to Europe, or Greenland, it must have flew around a big storm that occurred the night before it was found, as the radar photos of the storm made the Schomberg area a very logical place for it to land.

After seeing this bird, I headed to the airport and traveled to Cuba for a week.  Now I'll begin writing that blog post, which may take a few days to finish!
Posted by Carter Dorscht at 4:43 PM